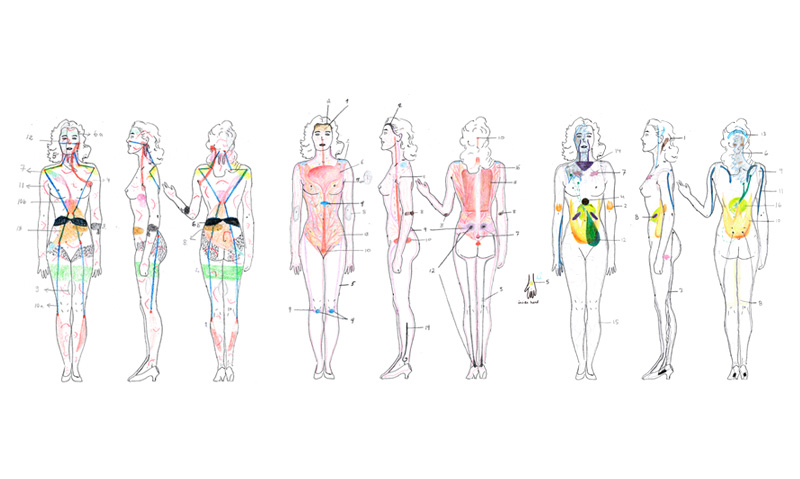 Somatic comes from “soma” meaning “of the body” or “the body in its wholeness”. Somatic practices don’t have an official definition, but could be described as movement practices that compared to a more rigorous dance training, as ballet or modern dance, have a more “natural” approach based on listening to the body and mind. Somatic practices often aims to connect the body and mind through listening to the body and through the use of touch, breath and movement and can be described as body therapy, body-mind integration and movement awareness. Some of the more famous somatic practices are Alexandertechnique, Body Mind Centering (BMC), Kleintechnique and Feldenkreis.

Through making up the notion of Fake somatic practice we wanted to give ourselves the liberty of ignoring both scientific facts and common sense in favor of imagination. The practices we created where fake in the sense that they lack the parts of a somatic practice that claims to be real. Our practices are nevertheless not less real in the sense of our belief in their political, physical and choreographic capacities. 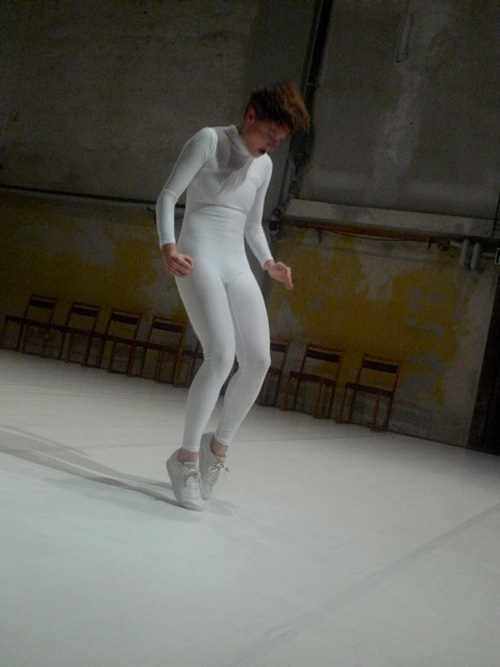 The concept grew out of an interest of doing somatic practices, as they can provide a focused research on the body and its capacities. At the same time, we were troubled by the ideology and economy that we perceive in many of them. Several of the well known somatic practices function within an economic system centered around the founder, with expensive courses and certificates. The practices express a wish to form the healthy body and soul through scientific claims and use a language that combines anatomy with spirituality. Many of them emerged as a critique of the hierarchical and streamlining techniques of ballet and modern dance but have grown to become part of new hierarchies. In the same way as these techniques at the time questioned prevailing methods of dance, we wished to question the underlying presumptions of somatic practices. How do we look at the body, how should it function and what should it do? How can we make claims as to what an apt body is? Rather than trying to show the right way to a good body, we want to suggest the many ways to different ideas of what a body can do.

Our interest in the Fake somatic practice is in first hand not to do research in anatomy, but rather to shortcut presuppositions of how a practice is constructed and use it as a method for making choreography. We want to emphasize how every practice is always made up based on ideologies and expresses certain politics, and make these explicit.

Rosalind Goldberg, Sandra Lolax and Stina Nyberg met at Balettakademien in Stockholm in 2004 and have been working together since 2007. We share an interest in movement based choreography and questions concerning its circumstances; modes of collaboration, methods for production and presentation formats. Through formulating different protocols of how to work for each process we try to challenge habits and create specificity in our performances. We work in close collaboration in creating the context for our works but remain diverse regarding its artistic expression. With this we want to create a stable ground for production but keep the discussion within the group vivid.

Fake somatic practice is a part of the ongoing project Weapons of mass production that we started in spring 2010. Based on an interest in the production process and its circumstances the project gathers and tries out methods for choreography. In the summer 2010 the project started with a three weeks residency at MDT in Stockholm. Every day a new method was tried out and its result performed at the end of the day. During the weeks we made 14 performances ranging from 30 seconds to 30 minutes. Through a mass production of performances we wanted to complexify research, rehearsal and performance, and talk about quality. In February 2011 the project continued in Berlin where we developed the idea of the Fake somatic practice.